It’s not clear if his grave was ever marked, or was destroyed by bombing in WW2, or cleared in the 1950’s 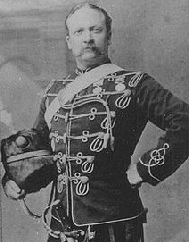