He lost his arm in a sword fight, as a result he came up with a way of drawing the pistol from the holster, the Sam Browne belt 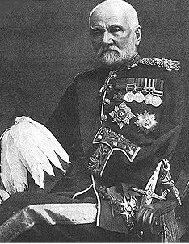