His VC was sold in 2008 by Dr David Gardner a great grandson. All the money raised by the sale was donated to Scottish charities. 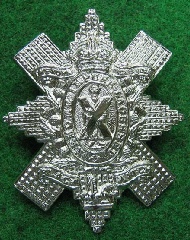