The gravestone originally had stained glass in the circle on the cross, but has long since gone. 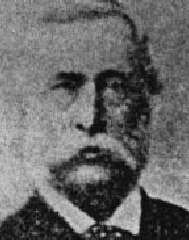