He was a member of the passage crew in X7, during Operation Source on the Tirpitz 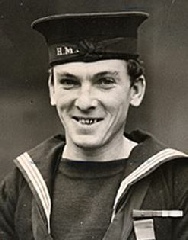