Before the war he was a local reporter for The Province newspaper, in British Columbia 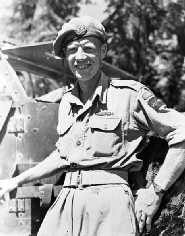