At the siege of Delhi on two separate occasions he went out and brought in wounded soldiers. Who had they been left, would have met certain death. All the while under heavy fire 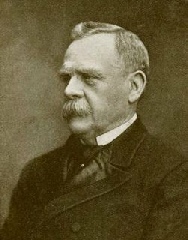