Place Of Death   Remains found at the bottom of cleft in a high krantz in the Perie Bush, Amatola Forest, South Africa

Cairn of stones placed by natives on the spot where his remains were found in the Perie Bush, Amatola Forest, South Africa, later replaced with an iron cross surrounded by iron paling, all that now remains are the bolts cemented into the rock 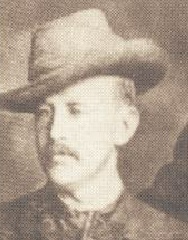