Fraudulent claim for a replacement VC made from Adelaide, South Australia in 1898, refused as claimant wasn't the awardee 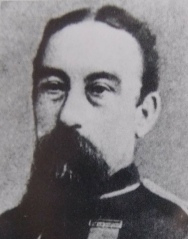