Being wounded in the leg in a previous engagement, he was shot and killed on his first day back on duty 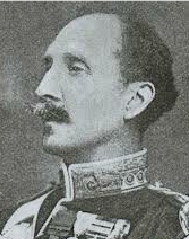