He won his VC in Belgium in an action at Wijdendrift. During the action he had been wounded for the fifth time, so eight times in his military career.

He was posted home, but he decided to go back to the front to be with his men and regiment. He was stopped at the coast but tried again and succeeded to gain passage back to France, and back to the front.

Legend has it, he had a bet with a fellow Sergeant on who would get the ninth wound stripe. Back at the front he showed he cared for his charges by retrieving I.D. tags and effects from no mans land. It was on a trip to help a wounded soldier, he was fatally shot. 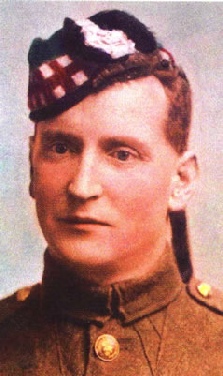 The high esteem he was held in, he was taken back 17 miles behind the lines, and with six VC’s acting as pallbearers, buried at Vlamertinghe New Military Cemetery.

I don’t think it’s wrong having a favourite Victoria Cross winner, Rose Coombes (Before Endeavours Fade) was asked the same question, she gave as her favourite… John Skinner.

My favourite VC, if there is such a thing, as they are all deserved, is John Skinner VC DCM Croix DE Guerre, Colour Sergeant Major in the Kings Own Scottish Borderers, a soldiers soldier.

He joined the army and the Kings Own Scottish Borderers at the age of 16. Fought in the Boer War, receiving three wound stripes. Started right at the beginning of the First World War in August 1914, winning his DCM in the October. So fighting at Mons, Gallipoli and first day of the Somme, he had done a lifetimes fighting in a couple of years.