As the war started, he was working on a rubber plantation in Sri Lanka. Although trying to enlist, he wasn't allowed till 1916 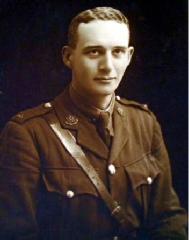