Place Of Death   Near the railway line west of Albert, France

After University, he embarked on a career in the army, joining the Hertfordshire Militia in 1903 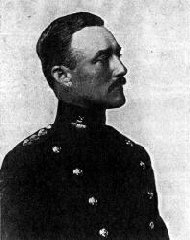