As with lots of names of soldiers in the army, his name was sometimes misspelt as ‘Govind Singh’ 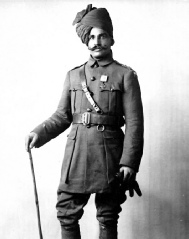