Always known as Harry, he was the most decorated Australian soldier during the First World War 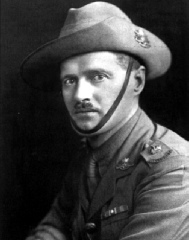