The original VC was stolen in the 1930's, a replacement being given on the 9 September 1937 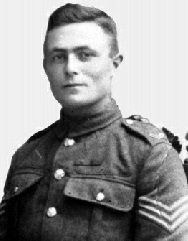