Place Of Death   Near Ushant, Bay of Biscay,

Buried/Location Ashes  Lost at sea, 22 miles off the isle of Ushant, Bay of Biscay, France

P  Brass plaque, memorial window & named on wife's memorial plaque, Stuart Chapel & altar frontal made by his daughter in memory of him, his wife and grandson, Parish Church of St Anne, Bagshot, Surrey

Whilst walking on deck he slipped, hit his head and fell overboard.

He was the governor and tutor to prince Arthur third son of Queen Victoria.

"Kumenhof" was his family's country retreat, Livonia is now Latvia and not Lithuania.

He was Aide-de-Camp to Queen Victoria.

After an attack on the Redan he volunteered to go back out to bring back the scaling ladders. Whilst doing this he also rescued twenty wounded soldiers from under the Russians noses and brought them back to the trenches 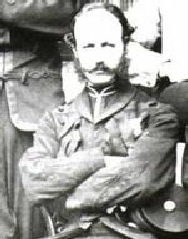