He died during his VC action, his body later washing ashore on the coast of Sweden, were he is buried 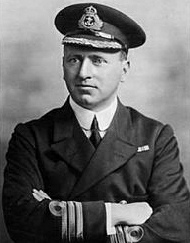