The 57th Regiments nickname was “The Diehards”

On 22nd March 1855, he rallied the troops who had recently lost some trenches to the enemy, thus regaining their positions. On 18th June 1855 doing similar work at the redan and steadying his men and fighting until the ammunition ran out. 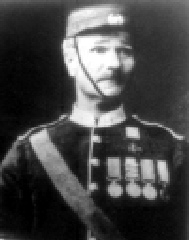