He was on sentry duty on his own in an advanced, lonely position and by himself, captured two out of three Russian soldiers who were hiding in the brush spying on the position. 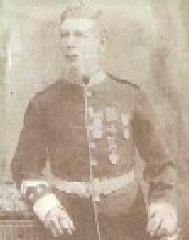