St Andrews Church, Eastney, is now private housing, when the church was closed some fittings were removed, some were left boarded up. Those that were removed, we are trying to track down, Lewis Halliday’s could be amongst them 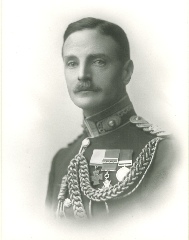 Thank you to Alison Sutherland, Sir Lewis's Granddaughter for the portrait picture