Winning the Victoria Cross as a Sergeant, he later attained the rank of Lieutenant-Colonel 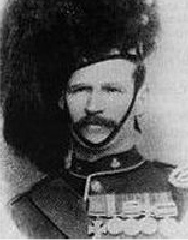