Place Of Death   At his home, Cobalt, Ontario, Canada

He was presented with the Victoria Cross by the future George the Fifth, on a visit to Canada 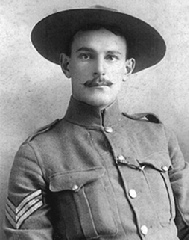