There is a false grave to a G Parker VC at Stella Wood Cemetery, Durban, South Africa 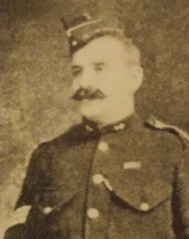