A road was named after him at the old barracks in Richmond, now nice residential properties 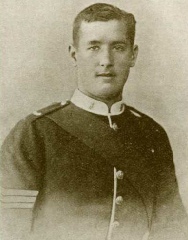