Between wars, he took part in a sixteen month scientific expedition, in northern China 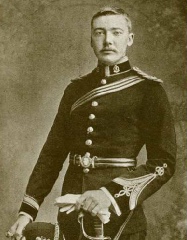