In the 1st World War while in Iraq he contracted a disease, that invalided him out of the army, and later dying from this in London 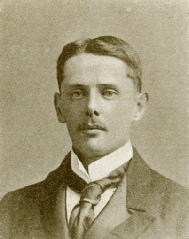