In later life he became a member of The Honourable Corps of Gentleman At Arms, the monarchs bodyguard 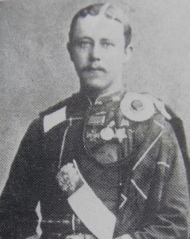