His Victoria Cross Award was backdated to 1st September 1879, two days before his death 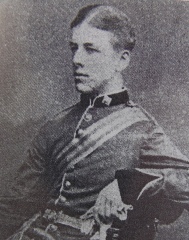 Thank you to Jules Wallis, Archivist at Felsted School for photo of their Plaque