Place Of Death   At his home, 'Old Park', near Chichester, West Sussex, England

Memorial in the Speech Room at Harrow School, London 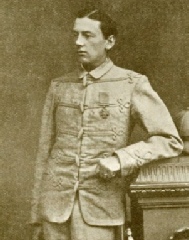