Had his VC action happened now, he would have been awarded the George Cross, as his action was not under enemy fire 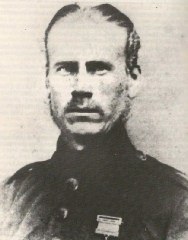