As a young boy, he was prisoner of the Emir Akbar Khan, in Kabul, Afghanistan. It’s here he learned to read and write Hindustani and Persian 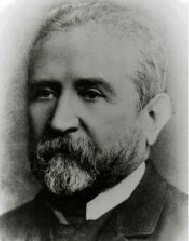