A headstone was erected in 1991

VC forfeited for desertion on active service, theft of a horse, arms and accoutrements 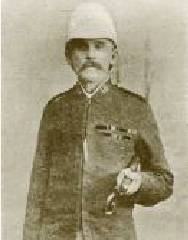