He emigrated to Australia in 1861 and became a superintendent of prisons. 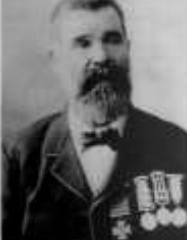