Name on headstone is that of his brother, his own name is unreadable 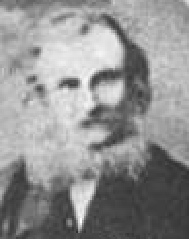