VC Presented   July 1862 by Major-General Hon A A Dalzell at Dover, Kent, England

Chief Commissioner of the Order of St John in 1893 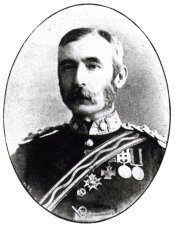