During the defence of Lucknow, on 7th July 1857, he assaulted a house which was held by Sepoys, suspected of being a base for mining operations. Showing extreme bravery in leading from the front. On 26th September he led a charge and captured an enemy cannon 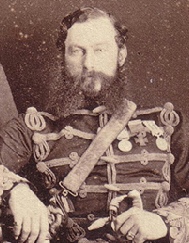