During the defence of Lucknow, he saved the life of a civilian who was trapped under fallen masonry whilst under sustained rifle and cannon shot 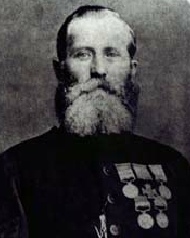