Entry in Book of Remembrance at Overdale Crematorium, Bolton, Lancashire

Whilst in a deep depression after his VC was stolen, he threw himself under a train 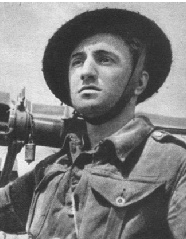