In the finest traditions of the Navy, he went down with his ship 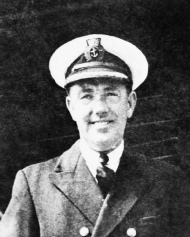