He was originally buried secretly near crash site by local citizens and then re-interred by Allies in 1945 at Lanaken Cemetery, 20 miles north of Liege 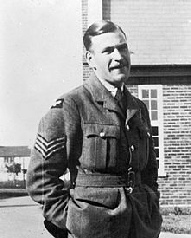