Place Of Death   At his home, Alton, Hampshire, England

He wrote 3 books about his life and the Royal Navy 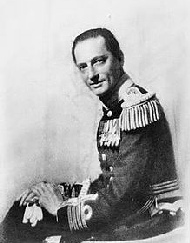