After his VC action, he was so badly wounded that he was invalided out of the army and returned home. 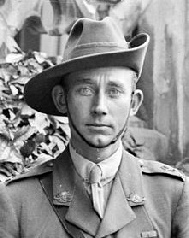