He, like his father, was awarded a medal for saving life at sea. His father won the Albert medal, while Alfred won the Bronze Medal of the Royal Humane Society. 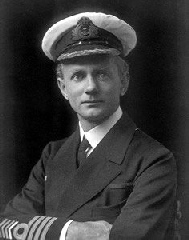