In 1970, his Victoria Cross was stolen from his home. A reward was offered and the Medals were recovered and the thief got six years. 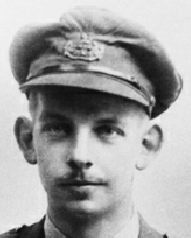