The tank that Richard Wain was in when he won his VC, was called Abou Ben Adam ll,  it was a poem by the English poet Leigh Hunt 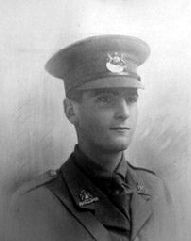