Place Of Death   Near Lens, France

VC Presented   8 May 1918 by the Governor-General of Canada, Duke of Devonshire at the Legislature, Toronto, Canada to his sister, Florence Brown

Branch of the Legion named after him, Simcoe, Ontario, Canada

He joined the Army at 14 as a Drummer Boy and served in the Boer War, discharged after 15 years service, he emigrated to Canada 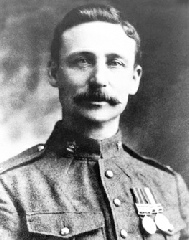