Known by the Press as the Dockers V.C.

On loan to the Imperial War Museum - The Lord Ashcroft collection I.W.M 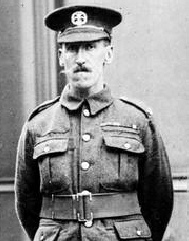