Place Of Death   Near Wancourt, France

A Swimming Pool was built in his memory at his former school, Willaston School, it was paid for by his parents 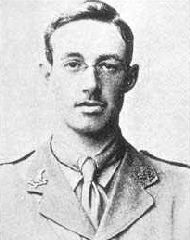