He was originally awarded the DSO by Sir Douglas Haig, he wore the DSO ribbon for two weeks until the award was made up to the VC 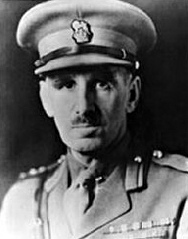